The current Heart of the City II regeneration programme in Sheffield city centre has provided an important opportunity to uncover evidence of Sheffield’s industrial past. Sheffield is famous as a centre not only of metalworking, but also innovation of techniques and materials. Steel, cutlery and other metal items manufactured in Sheffield found a global market. The centre of Sheffield, including the Heart of the City site, became characterised by small cutlery and plating works. The remains of some of these buildings can be seen today. Physical evidence for demolished buildings depicted on historic maps as well as the activities conducted in and around them can be found beneath the fabric of the modern city. 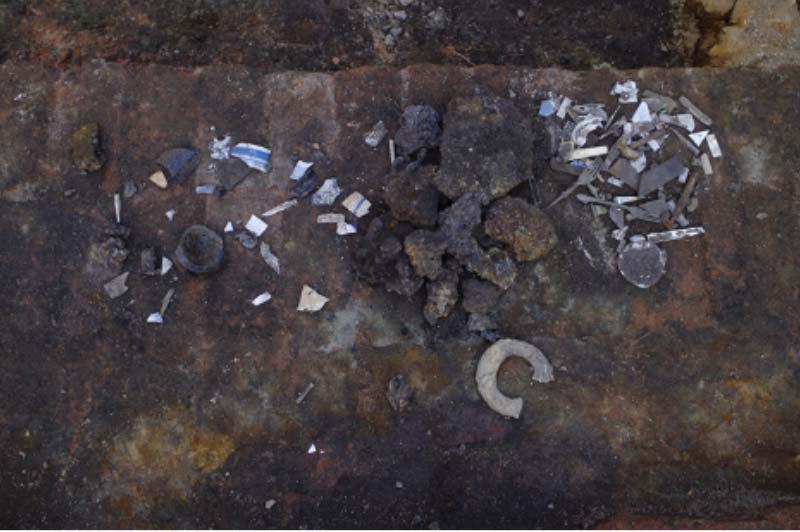 An assortment of mother-of-pearl offcuts, pottery and items associated with metalworking. These examples date mainly from the 20th century and were found on the site of a plating works off Cambridge Street. 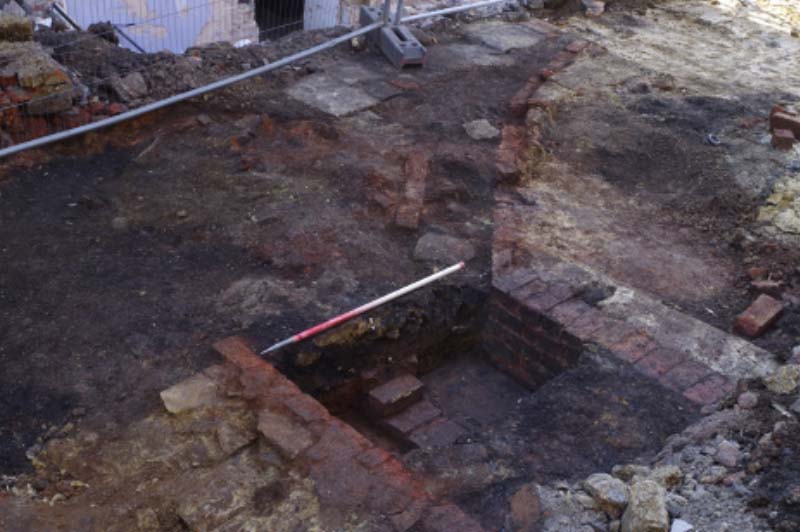 Remains of a curving flue found between two buildings on Cambridge Street. A great number of different flues and chimneys would have been visible on the Sheffield skyline fulfilling a variety of different functions. Crucible and cementation furnaces, fundamentally important to the steel industry from the early 19th century, both display distinctive chimneys. Increasing use of steam power led to an expansion in the number and types of chimney associated with industrial activity in and around Sheffield. 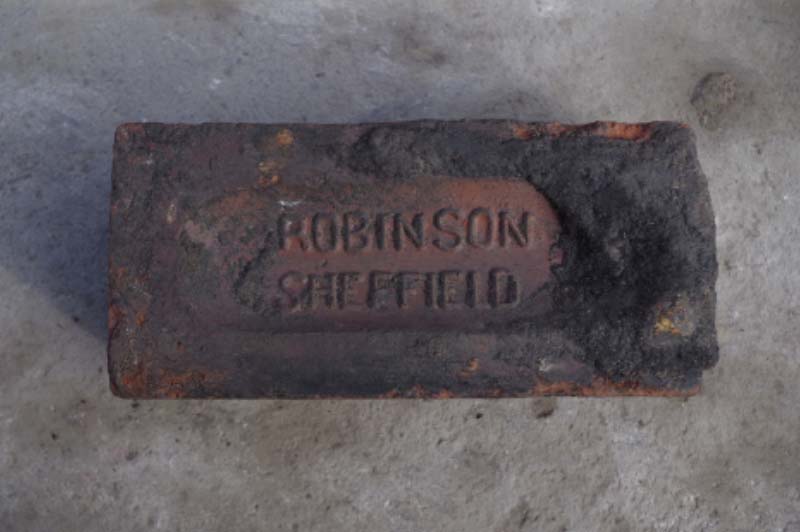 Robinson brick, Sheffield. Bricks can display a maker’s mark and can be helpful when phasing buildings and structural remains. They can sometimes be traced back to a manufacturer, generally local. The ‘Sheffield’ attribution suggests that this may be a product of James Robinson, who may have operated in Sheffield and was the son of George Robinson, a brickmaker in Masborough, Rotherham. 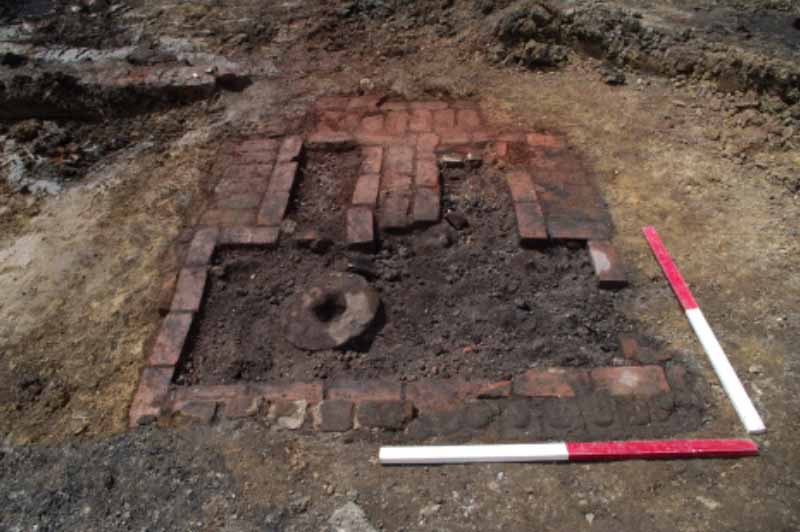 Grinding wheel deposited within a brick structure. Contemporary accounts (eg, Engles 1885) show workers in Sheffield were generally skilled and in many cases better paid than those in neighbouring towns, although many of the industrial activities conducted around the city led to specific health conditions. Grinders were particularly well paid but the work was hazardous and many died at a young age. 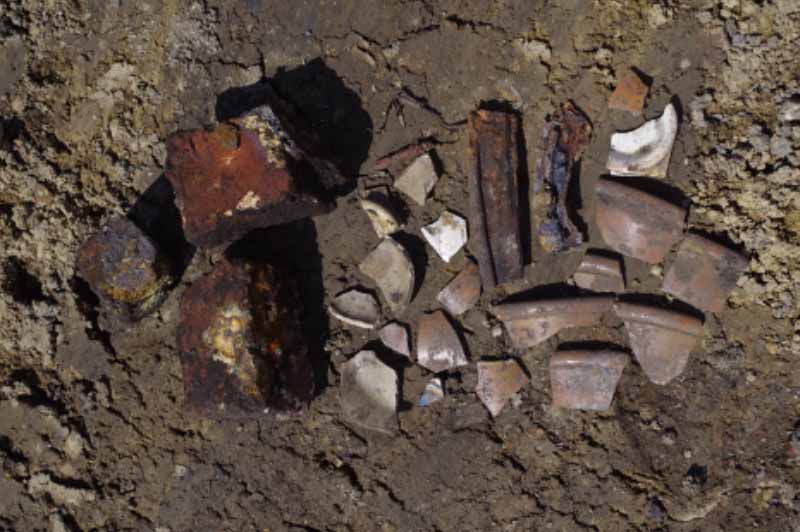 Pottery and brick assemblage from Sheffield city centre. Domestic wares are common on industrial sites and were often imported within material used for construction. Research is ongoing (Cumberpatch 2020) however it is thought that hard materials such as bricks and ash were collected at depots prior to distribution for use as levelling material. Pottery and other finds were included in this material and therefore often arrived incidentally to the activities undertaken in the areas from which they were recovered. 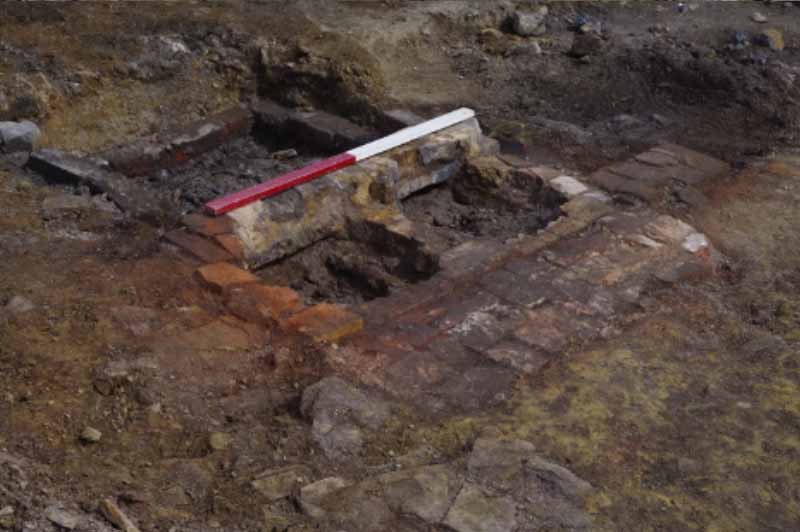 Crucible furnace showing holes for two crucibles. This was found in association with a small brass works between Carver Street and Backfields. The materials used to construct the furnace show the effects of intense heat. This example may have been used in brass production and is a lot smaller than the furnaces used in steel production which could often accommodate 10 or even 20 crucibles. 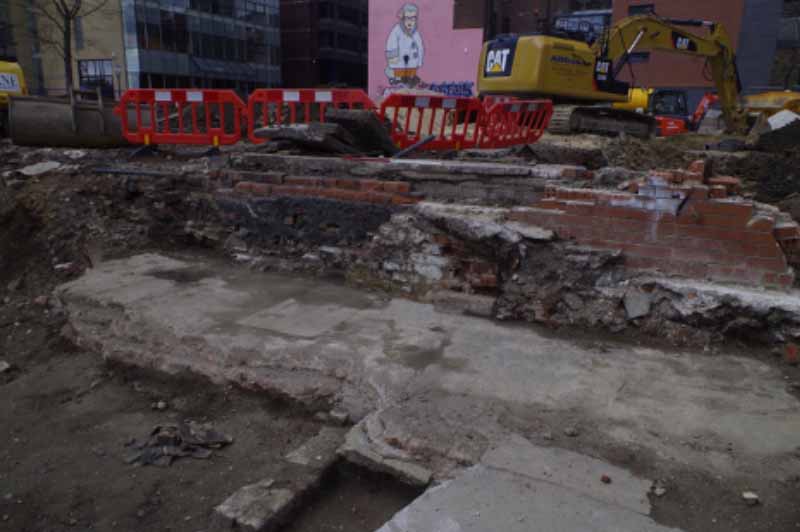 Brick wall between Backfields and Carver Street showing brickwork spanning 200 years. The earliest known buildings in this area appear to have been poorly built worker’s housing (possibly back-to-back houses) constructed sometime around 1780 and associated with the rapid expansion of the settlement at this time. By around 1850 the area had been repurposed and the original buildings largely demolished to make way for industrial buildings and commercial premises. Traces of earlier buildings survived in the fabric of Victorian or even later industrial structures rather than starting from scratch as we tend to do now. Elements of every different phase of activity on this site can be identified in this wall.

Engles, F 1885 The Condition of the Working Classes in England in 1884 (paperback edition 2009). Penguin Classics