The lower Rivelin Valley forms part of a green corridor along the River Rivelin stretching from the urban area at Malin Bridge out into the Peak District, dividing the communities of Stannington to the north, and Walkley, Crookes, Crosspool and Lodge Moor to the south. About 3½ miles (5.6 km) of the lower Rivelin Valley were host to a significant sequence of 20 water-powered mills and 21 mill dams, possibly the greatest density of mills over that distance in Britain. Six of the mills were built before 1700, with a further 14 being built in the first half of the 18th century. Only one, New Dam, was built in the 19th century. This sequence of Rivelin mills and mill dams forms an essential part of Sheffield’s heritage, and cutlery trade in particular, helping to tell its story from origins in rural workshops with water-powered grindstones. They also have a broader national and even international significance in relation to the history of the Industrial Revolution in Sheffield. Apart from Uppermost Wheel, the furthest upstream of the 21 sites, historic remains of all of the others can still be seen and together they form a sequence along the valley that should be preserved in its entirety.

Brief details of each site are included as separate entries in this People’s Heritage List – they can be found by using ‘Rivelin Waterpower Sites’ in the search function.

The majority of the buildings had been demolished by the 1950s, but unique amongst the Sheffield rivers, only three mill dams were infilled or built on. Most of the weirs still function, but are in various states of repair. The most extensive remains can be seen at Mousehole Forge (a Scheduled Ancient Monument with a Grade II listed workshop), which for at least a century was the only works in the world where anvils were made commercially for export, particularly to America. Four of the twelve bridges along the lower Rivelin Valley (Hollins Bridge, Roscoe Bridge, Packhorse Bridge, Rivelin Mill Bridge) are also Grade II listed.

A continuous nature and heritage trail weaves between the ruins for some 5 kilometres (3 miles), passing through woodlands and pastures that are also important for wildlife. It has open access for public recreation and attracts many Sheffield residents and visitors from outside the City, for informal recreation, education and research.

The valley-bottom area has been designated ‘Rivelin Valley – City Heritage Park’ and is managed and maintained by the Sheffield City Council Parks and Countryside Service. Much of it (excluding allotment areas) has also been designated as a ‘Local Wildlife Site’. Rivelin Valley Road, which runs along the valley bottom, was built in about 1906 and lined with over 700 lime trees, possibly the longest lime tree avenue in Britain. The Park can be accessed from various points along Rivelin Valley Road, or from the north (Stannington) side of the valley.

A popular café is situated near a children’s playground and the ‘Rivelin Valley Water Play’, which was refurbished in 2013 from the 1950s paddling pools. 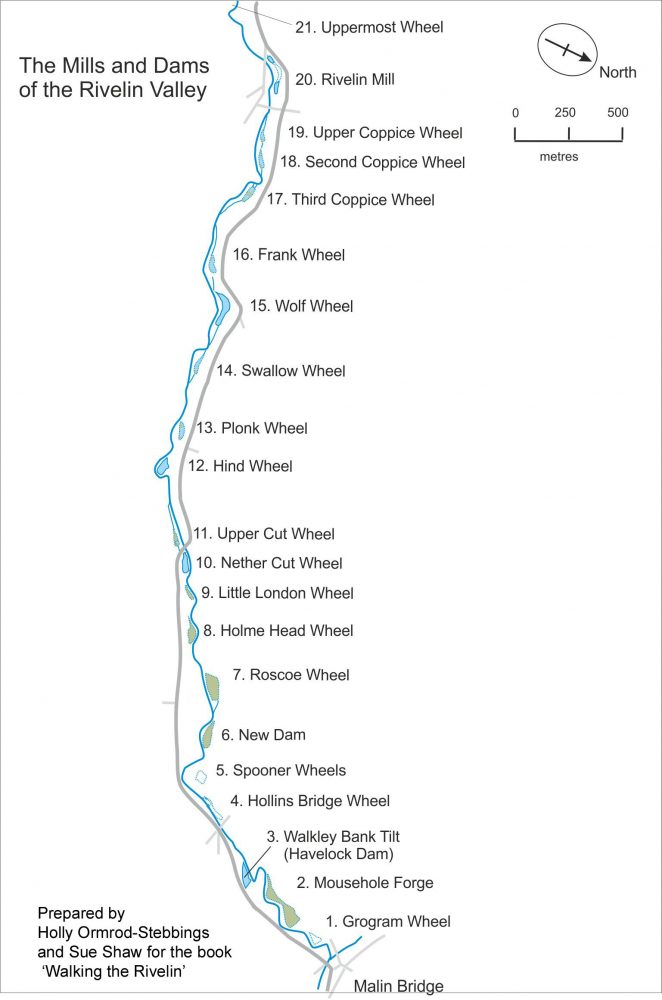 The mills and dams of the lower Rivelin Valley. (RVCG, 2015)