Spooners Wheel and associated water management system (including New Dam) are the remains of a water-powered site that dates from at least 1637– amongst the earliest to be built in the valley. It is one of the 20 water-powered mills built in the Rivelin Valley that now form an important part of Sheffield’s industrial heritage. It was variously used for grinding files, saws, fenders, scythes and cutlery, and as a knife forge. The site was in ruins by 1936. Although nothing remains of the Spooners buildings, traces of the water management system can still be seen. Of particular interest are the remains of New Dam (once used as a swimming pool) and the 17th century stone tunnel through the hillside.

The very popular Rivelin Chair Sculpture, by local artist Jason Thomson, was installed in 2011 on a plinth in the middle of the river on the remains of the Spooners/New Dam weir (Grid reference: SK 3181 8831) –  see separate nomination.

The site is owned by Sheffield City Council and there is open access – a public footpath, the Rivelin Nature Trail, runs through the site, which here can be accessed directly from Rivelin Valley Road and Rivelin Park Road.

The site of the former buildings lies in a bend on the River Rivelin, to the north-west of Sheffield City Centre, in a location now occupied by Rivelin Park Café. The remains of the water management system extends to the west.

Spooners Wheel and associated water management system (including New Dam) are part of a sequence of 20 water-powered mills (and 21 mill dams) along a 3½ mile (5.6 km) stretch of the lower Rivelin Valley, possibly the greatest density of mills over that distance in Britain. These sites together help to tell the story of Sheffield’s industrial heritage, and cutlery trade in particular, from its origins in rural workshops with water-powered grindstones. Apart from Uppermost Wheel, the furthest upstream of the 21 sites, remains of all of the others can still be seen and together they form a sequence along the valley that should be preserved in its entirety.

The two mill buildings, each with its own waterwheel, stood where the Rivelin Park Café is today. The Rivelin Park children’s playground, was built on the site of the mill dam in the 1950s and the area landscaped, so nothing now remains of the mill dam, buildings or the tail goit, which ran across what is now the grassed area in front of the café and straight into the Hollins Bridge Mill dam.

The Spooners mill dam was originally fed by a long head goit from the weir about 300 m upstream of the mill dam. New Dam was built in the early 1850s, replacing part of the head goit, to provide a supplementary water supply for Spooners Wheel due to a demand for more waterpower. In 1909 Sheffield Council turned the New Dam into an open air swimming pool. The pool closed in the late 1930s when the long wooden shed that was used as changing facilities was destroyed by fire.

A stone-lined tunnel (which is still present), presumed to have been built at the same time at the Spooners buildings (i.e. 1630s), took the head goit through the hillside between New Dam and Spooners mill dam. A hole opened up in the hillside above the river in 2009 that shows the location of this tunnel – a grille, which can be seen from the south side of the river, was installed across the hole to prevent access.

The weir is in poor condition, but some water is still diverted into a stream flowing through the drained mill dam, which is now well-wooded. The overflow from the dam (at the eastern end) is now crossed by a footpath bridge; water from the stream flows out of the dam at the deep drainage level and drops steeply into the river via a very short channel; the outlet from the dam into the Spooners tunnel is nearby. 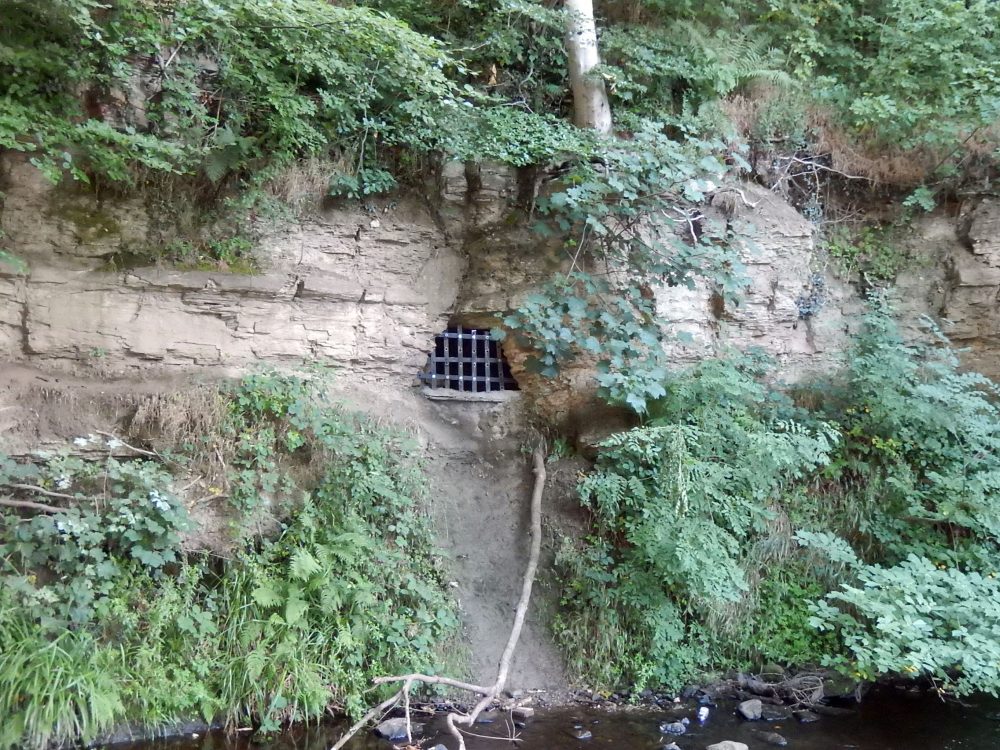